I learned how to make lotion last fall. My friend Julie had taken a lotion-making class and offered to teach a group of us. We were all somewhat intimidated but, fortified by a few glasses of wine, we bravely followed Julie’s instructions.

It turns out that making lotion is ridiculously easy.

I have a few friends who are interested in making lotion, but are a bit nervous, so I took photos last weekend to show just how simple this really is. One caveat: I’ve only made eight batches on my own, so I’m still learning about the different oils and such. Which is actually quite fun, I just can’t remember the properties of each. Every batch of lotion is a fun new experiment.

The basic ingredients are oils, waters, and emulsifiers. Oils are things like jojoba oil, avocado oil, etc. Waters include the obvious water (although it must be distilled water) as well as hydrosols, which are created from the water that remains after the distillation process that produces an essential oil. They look like water but have the scent of whatever essential oil was being distilled. An emulsifier helps form and stabilize the emulsion (i.e. lotion). 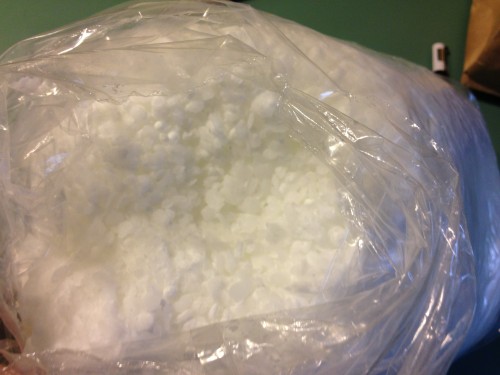 I start my lotion by measuring the three ingredients into two Pyrex measuring cups. The oils and emulsifiers go in the same cup. 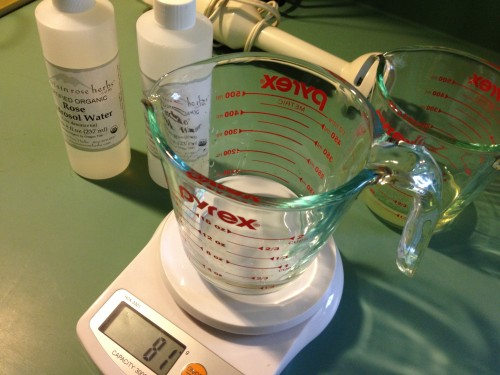 As you can see by the number on my scale, it’s okay to be a little off as long as your percentages are reasonably accurate. Here are the guidelines I’m following:

I’ve mostly made creams so far because it’s pretty dry in Colorado, especially in the winter, but I’m starting to experiment with more lotion-like percentages.

Once you have your ingredients measured out and happily in your Pyrex cups, you put them in a water bath. I start heating up the water before I start measuring. I have an elliptical pot that works perfectly. 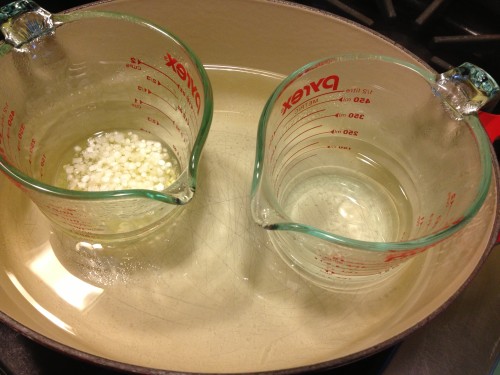 For this particular batch, my ingredients were:

The water should be just barely bubbling – you don’t want it boiling like mad. Both containers should be brought to 150 degrees Fahrenheit, then kept there for 20 minutes to break down the bonds between the oils, emulsifiers, and water. 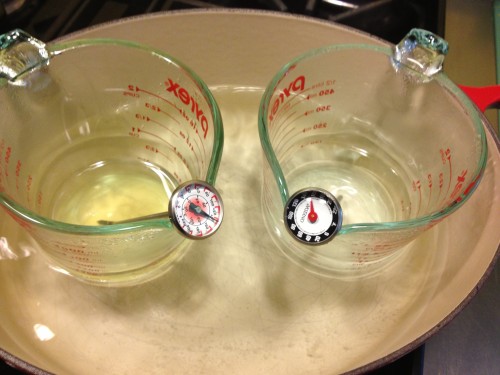 After the 20 minutes, pull both jars out of the water bath, make sure they’re within 5 degrees of each other, then pour the water ingredients into the oil/emulsifier ingredients…and voilà! Emulsification! 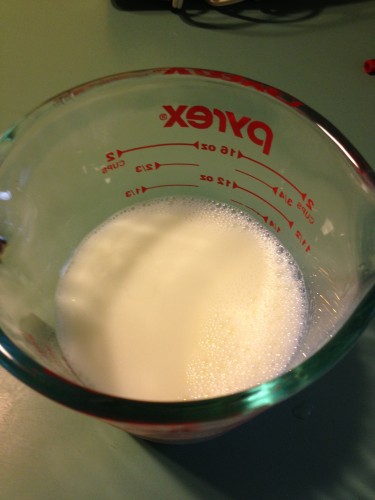 That’s the after picture because I couldn’t figure out how to pour and take a photo at the same time. The next step is to blend them together. I use a hand blender, and I managed to take one reasonably okay photo of this step. 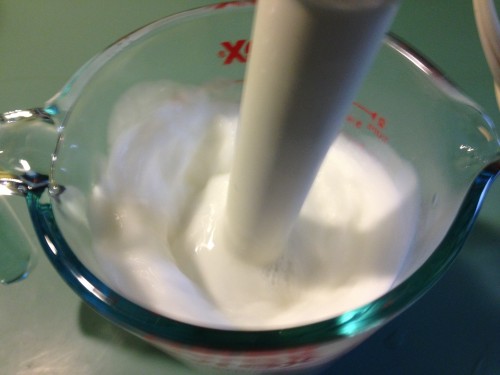 Once you feel happy with the mixing, you can pour the liquid into your containers. I don’t spend very much time mixing – it seems to just take a little bit. 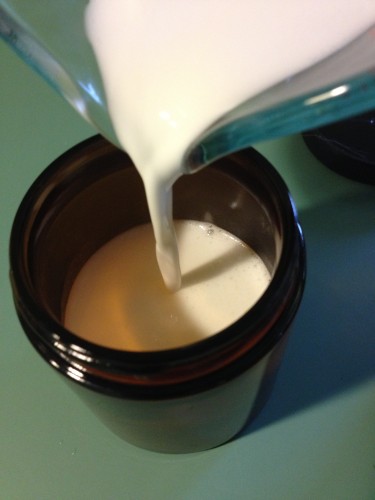 When the lotion is around 110-120 degrees you can add additional ingredients. I’ve only added essential oils, but you could also add preservatives, mica (to make it sparkly), and probably other things as well. 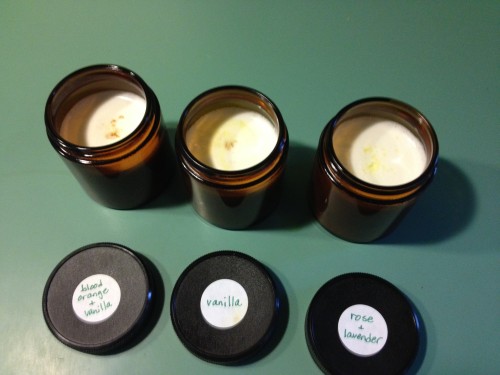 I usually add the oils and make my labels (so I don’t forget what I used), then stir. Here is a photo before stirring. The brown in the first two jars is vanilla oil – it looks and smells like vanilla extract. Once the lotion is at room temperature, you can put the lids on. You can also use cuter labels – mine are pretty bare bones, as you can see.