The first pattern I attempted after my multi-year hiatus from sewing not only required the basic skills which I’d had at one time, it also was designed for stick figures instead of people. I had to add 1/2″ to the diameter of the shoulders just to get to where I could pull the sleeve up my arm, and it was clear that more work would be required even if I managed to stop sewing things inside-out. 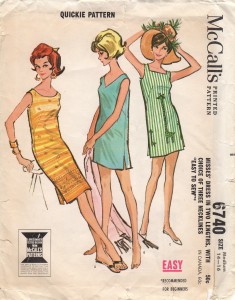 Hooray for a remedial sewing opportunity! But it provided some challenges. The first one I tackled was the neckline. Here’s the before picture: 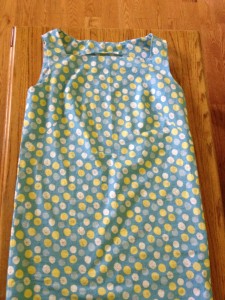 It’s not the best photo, but take a look at the girl in the giraffe version on the pattern. She looks happy, doesn’t she? She’s probably on a beach vacation, so she’s able to ignore the uncomfortably high neckline. Sure, some people don’t mind the feeling of being on the verge of being strangled, or turtlenecks would never have taken off. I’m not one of them. This one isn’t even that tight, but for a summer frock that should make you feel carefree and happy, the neckline is surprisingly high.

The inside of the dress now looks a bit Frankenstein-ish since I made the decision to lower the neckline after I’d clipped corners and trimmed away the extra fabric on the seams, but the outside looks much nicer – and the dress feels way more summery. I also learned a valuable lesson…just because the women depicted on the pattern look comfortable doesn’t mean you will feel the same.

The next task was to deal with the width of the neck. I definitely do not have narrow shoulders, so I was surprised to find that the straps were far too wide for my build. After some thought, mostly involving lots of button browsing (I love buttons!!!), I decided to fold in the fabric neckline on the front of the dress and add buttons to make it look like I’d planned this all along. I tacked it down about 1/2″ on each side.

The last step was the hem. I cut the dress out at the longest length, then asked the man of the house what he thought of the dress. He said it looked nice in a shapeless kind of way, and reminded him of the dresses his aunts used to wear when he was little…right at the time when dresses like these were all the rage. If that’s not success, I don’t know what is!

That said, it was hard to imagine I’d ever actually wear something that looked that much like a potato sack, so I hacked off 9.5″. 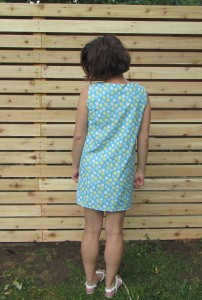 That’s our brand new fence in the background. The process of getting it built has been kind of like making this dress.